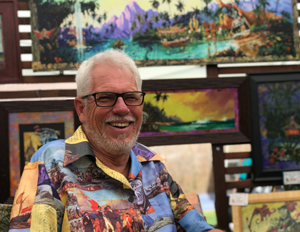 “Painting, like all art, is the overt expression of inward emotions. When I paint I feel God’s joy spring from within me and onto the canvas. I am thankful for this gift and hope it brings the viewer pleasure.”

Norm Daniels was born and raised in San Diego, California. He was a surfer but it was drawing that held his fascination the most. His father, a cartoonist taught him how to draw “toons” and as early as he can recall he was scribbling on any scrap of paper he could commandeer. Inspired by artists Dr. Seuss and Rick Griffin, the leading designer of psychedelic posters in the 1960s and surf art cartoonist, Norm believed everything imagined was possible in toons.

In college, Norm found that the study of Architecture was a fitting outlet for his passion to draw, which lead to a career designing custom homes in San Diego. In 1989 Norm added Graphic Designer to his resume and found inspiration in the illustrations of Dean Cornwell and thought he would try oil painting. Norm then studied with master “plein air” artist Ken Auster of Laugna Beach. With a few rules of application and a life of design composition behind him, Norm proceeded to paint as much and as often as possible.

Inspired by his love of plein air and surfer toons Norm developed his own unique style of painting, he allows the paint to flow from his soul and onto the canvas, reflected in his composition with bold brush strokes, dramatic color palettes, and a little “hang 10”.