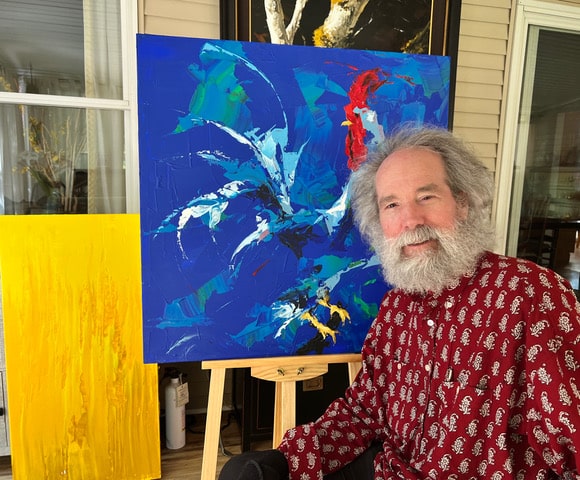 “I paint the world as I see it – dynamic, multidimensional and full of contrasts. The roosters that roam my canvas reflect that vivid reality. To capture their elegance, sass and joie de vivre is the challenge and joy of creativity.”

When people see Thomas Easley’s paintings, they are immediately drawn to the rich hues, kinetic energy and the almost tactile nature of his art. The pigments are deep and luxurious, the paint sculpted on canvas to create a rush of color, texture and form that amplifies contrasts. The resultant artwork has a “presence” filled with energy and movement that evokes a visceral connection with the viewer.

But as much as Easley is an artist of color, texture and movement, he is also an artist of the mind. He has long held that man is multidimensional, and his art is an ongoing exploration of his own creative multi-self. That is a rare quality in the risk-averse world where sticking to “mastered” abilities is considered the safest route to success.

Easley sees his art as an ongoing quest of creative experiment and expression. This diversity in styles and themes has been a running thread through his artistic journey, from the early manuscript illuminations and miniature paintings in the early 1980s to the dazzling architectural Venice landscapes, powerful “Dimensional Realism” and the more recent “extreme impressionism” that straddles the line between impressionism and abstract art. It is precisely this freedom from constraint that makes Easley’s art so powerful.

Easley’s paintings have been widely exhibited in the U.S., Europe and Asia, in art galleries, museums and public spaces. His work is the collections of discerning art lovers, including the late Diana, princess of Wales, Thomas Hoving, former director of the Metropolitan Museum of Art, and Arrigo Cipriani, owner of Harry’s Bar and Cipriani Hotels. He lives in New York’s beautiful Hudson Valley with his wife and two sons.

Thomas Easley is a figurative American painter known for his bold, kinetic artwork that straddles the line between impressionism and abstract art. His work reflects a lifelong effort to live in the moment and share how he sees the world – dynamic, multidimensional, and full of contrasts. A sense of presence is visible in his art, whether in the movement of his nudes or the joie de vivre of the roosters that roam his canvas. His landscapes are not just tranquil visions; the play of light and color creates a sense of drama.

Easley was born in Oroville, California, and raised in Lake Tahoe when it was still a quiet mountain town hidden from most of the world. Easley was already a professional skier, a guitarist in a rock band, and a published poet at 20. Painting came to him serendipitously. Struck by the beauty of illuminated manuscripts in the famed Folger Shakespeare Library in Washington, D.C., Easley decided to apply the illumination technique to one of his own poems. It was a work of art. An admirer purchased the poem, which prompted Easley to make his first painting.

It wasn’t long before Easley’s art began to get noticed. He settled in England in 1980 where he refined his skills as a classical realist, specializing in miniature paintings, portraits, manuscript illuminations and heraldry. He became the first foreigner to be inducted as a full member of the Royal Miniature Society. Easley later moved to Venice where expanded his use of glazed oil techniques to paint large-scale architectural landscapes, floral still life and nudes. While in Venice, Easley also developed a distinctive blend of pencil, chalk and watercolor applications that transformed simple pencil sketches into multi-layered works of art.

A visit to India, a country with a rich history and deep philosophical traditions, made Easley feel he had come home. For the next decade it became home. India’s rich perspectives on multidimensional reality led Easley to immerse himself in dimensional realism, surrealism and allegorical works.

After two decades in Europe and Asia, Easley returned to the United States in the early Aughts and began experimenting with a mixture of styles and mediums.

Late one night, struck by inspiration and finding no canvas at hand, he pulled out a large piece of board used as stiffening for his mattress, and began painting his vision. What emerged was a style that melds the traditional with the new to create a blend that is uniquely his own. Using palette knives to layer and sculpt paint on board, Easley creates a rush of color, texture and form that amplifies contrasts on multiple levels. He builds images with energy and light that evoke a visceral connection with the viewer.

Easley is the author of several books, including the best-selling Figure In Motion, which celebrates the female form. His other works include Yubbles and the Mumdebobbin, On The Elephant’s Knee, and Between Apes and God. Easley is a Master on the Times of India’s Speaking Tree blog.